A few months back a friend gave me insanely cool news…that she and the choir she sings with, would be performing at the Lincoln Center for International Women’s Day.  Say what?!  There was no way I was going to miss seeing her up on that stage, so a trip to NY was now in the works.  The concert was scheduled for Monday, March 10 so I thought I would go down for the weekend and play tourist with my friend’s husband while she was in rehearsals. They would be driving down from Toronto on the Friday while I would be flying in that same morning, so I had most of the day to myself.  After dropping my bag off at my hostel, I set out on my own, heading towards Bryant Park and the New York Public Library. 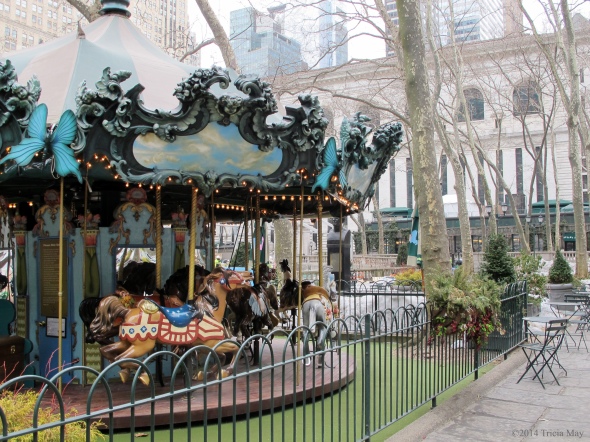 I wasn’t sure what to expect from the library…I was just told that if I ever got to New York that I had to go inside.  I love books, so hey, why not.  I was not expecting this: 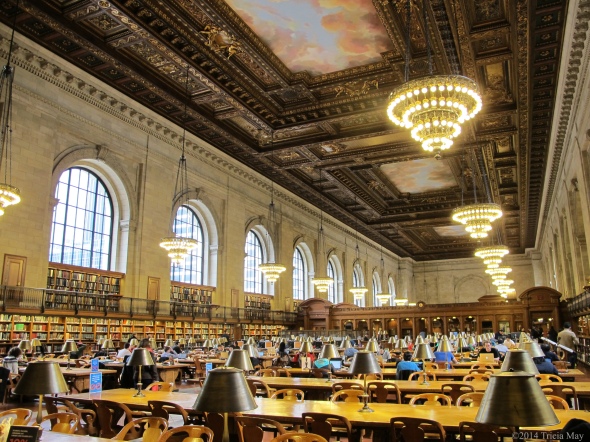 We sure don’t have libraries that look like this where I come from!  What an environment to just sit and be quiet in.  To read a book, a newspaper, to study, to surf the internet….so calming and peaceful, especially considering the constant bustle of the city just outside the doors.  I could have stayed there for quite some time, but there were so many things I wanted to see and such a short amount of time to do so.

From there, the rest of my day was spent walking.  Walking, walking and more walking.  I went into Grand Central Station ( I never knew there were so many shops in there), 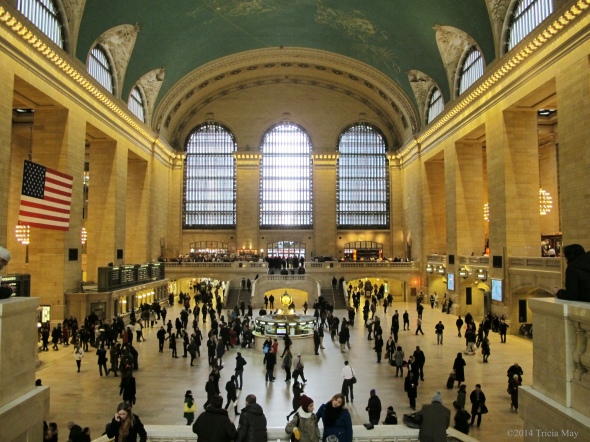 and then just started walking south.  I turned around not long after the iconic Flatiron Building.  What a beauty.

I took a gazzilion photos of it…it’s just so iconic and such a beautiful piece of architecture.

And how could I resist photographing Macy’s.  It’s a store that I’ve never been in, but one that I’ve heard about and seen so many times….I still didn’t go in though.  I thought I would have more time later to check it out, but I never did. 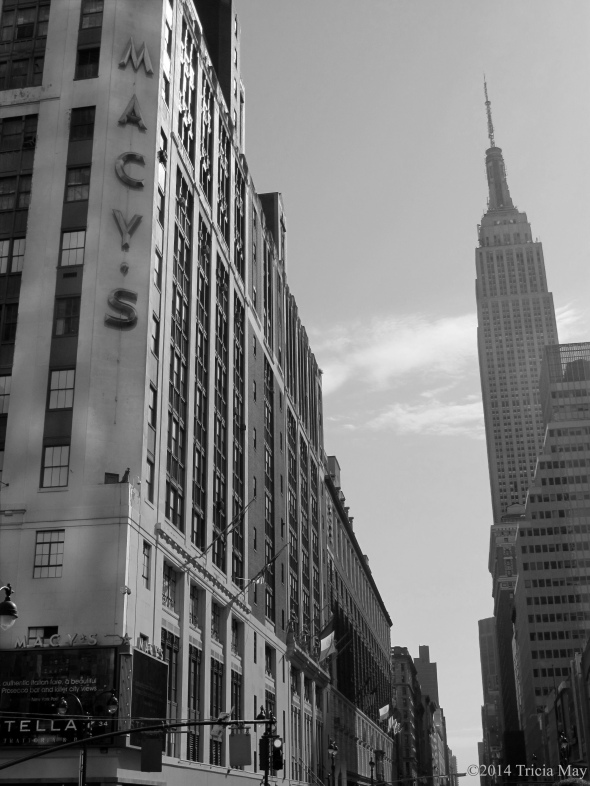 Macy’s and the Empire State Building

I headed back uptown to my hostel in order to meet my friends for dinner and afterwards took a little walk to Rockefeller Center.

And look at the place all lit up…

After a good nights sleep I was up for some exploration.  My friend had rehearsals all day so her husband and I went off on our own, starting with a bus tour to get a better sense of what we wanted to see.  Along the way we learned some interesting tidbits, like the owner of Macy’s died on the Titanic, the Chrysler building was the worlds tallest building…but only for eleven months, and that Wall Street had an actual wall that separated the Dutch and American settlers that the British eventually tore down.

Brooklyn Bridge from a bus tour

We decided to get off at Central Park and just started to wander while eating lunch from a food truck.  It didn’t take us long to see some fantastic sites.

While I wish it was warmer out, it was still nice to see people skating, because how classic is this?  Or this?  I don’t know how many times I’ve seen this bridge in tv shows and movies, so it was cool to see it in person.

I could walk around this park for hours, but of course there were other things to see, so we turned ourselves into the direction we wanted to go and found ourselves on the Mall where we encountered this busker…the bubble man.

Pretty impressive – and funny when they would pop and the kids would kind of squeal as they got sprayed by the soap.  We finally made it to our destination for the day – the Metropolitan Museum of Art.  I have always loved Egyptian art, so this was going to be so interesting for me.  What a collection! 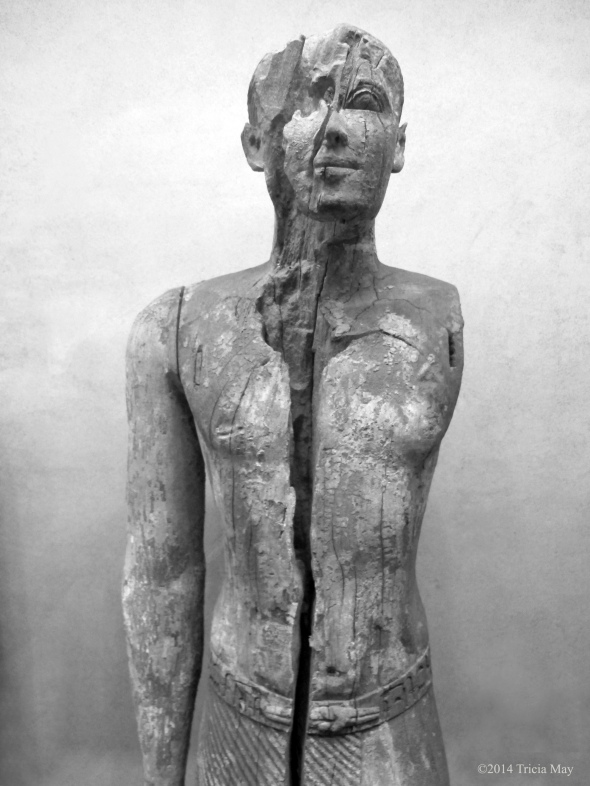 Coffin and Mummy of Khnumhotpe

I could fill this post up just with information and pictures from the exhibit, but that’s not what you’re here for.  After leaving the Egyptian exhibit, we went into an atrium area with some gorgeous pieces, like these: 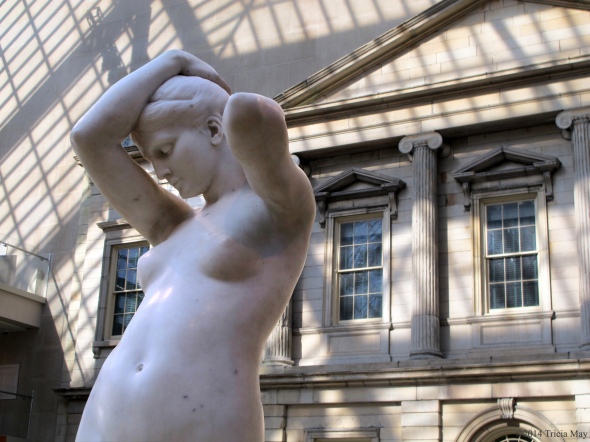 Diana – smaller cast of the one on Madison Square Garden

We also checked out the Modern Art gallery, the Impressionists and a display about Papua New Guinea.  Now that had some interesting cultural pieces the like I had never seen, like body masks. 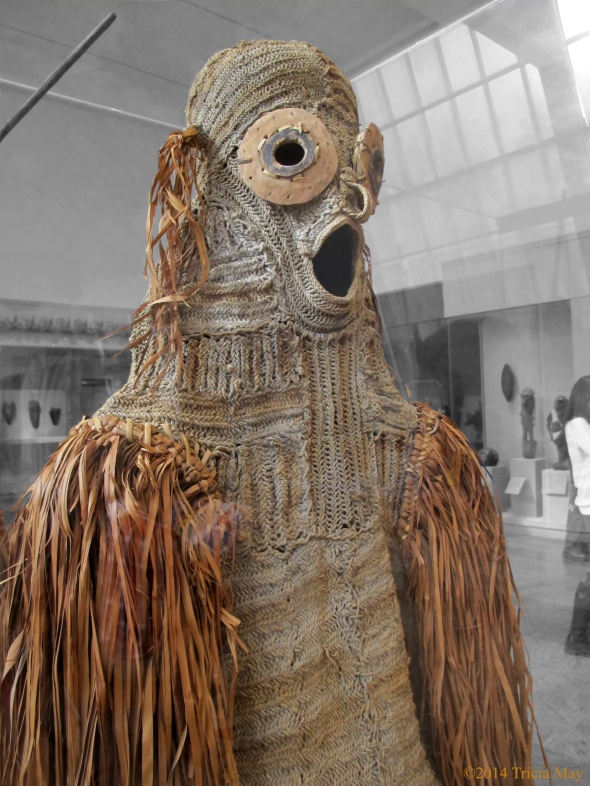 By this point I was getting pretty sore of foot and a little museumed out, so we took off and went back to the hotel.  Rejoined with my friend, it was time for dinner and then a visit to the Top Of The Rock for some night time vistas of New York from above.

View from Top of the Rock

Day three…what a jam packed day this turned out to be.  With my friend still in rehearsals, it was another day of playing tourist with her husband.  First up was a walk to the Intrepid Air, Sea and Space Museum at Pier 86 at W 46th Street in the Hell’s Kitchen area.  The museum is a retired USS aircraft carrier which also showcases the submarine USS Growler, a Concorde SST, a Lockheed A-12 supersonic reconnaissance plane, and the Space Shuttle Enterprise.  As an engineer who’s job is to work on planes, my friends husband was kind of in heaven.

We checked out the submarine first – I can’t imagine living and working in such close quarters. 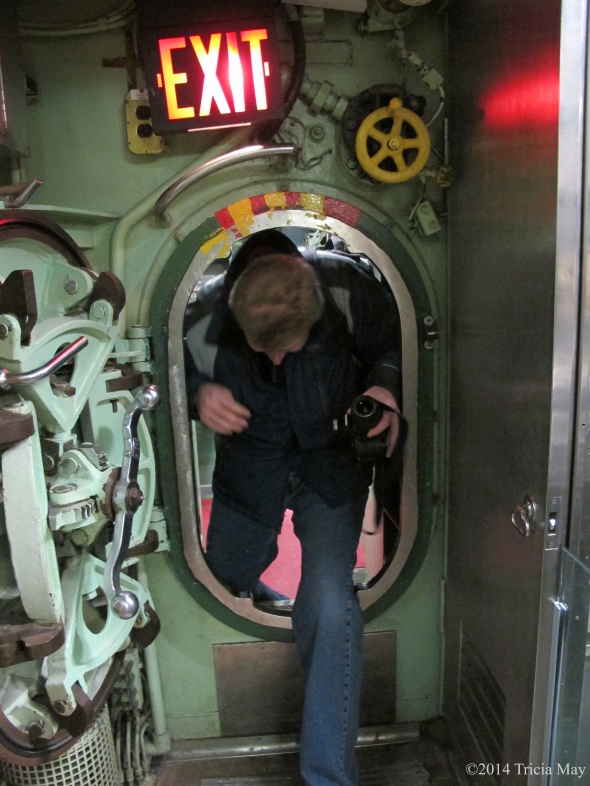 The hatches are not meant for large men 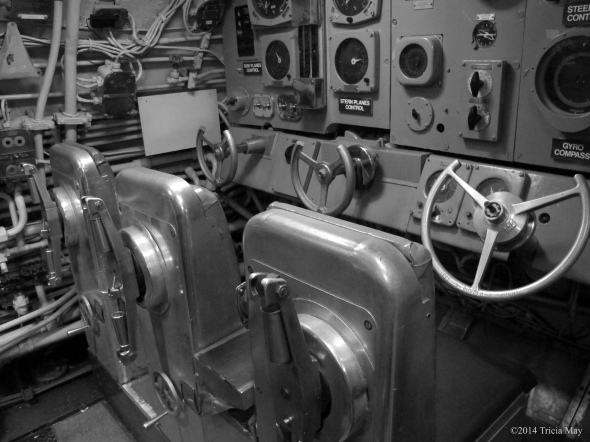 Control room of the USS Growler

Next up was the carrier and its flight deck.  There are many planes tucked inside, as well as on display outside.  There are volunteers on site to answer any questions you may have, and my friends husband had some pretty good technical chats with them as I wandered around.  A bit of a crowd was actually gathering around them because they were really talking about how the planes reacted in different situations…angles and airflow and stuff that I had no understanding of.  He was having a great time. 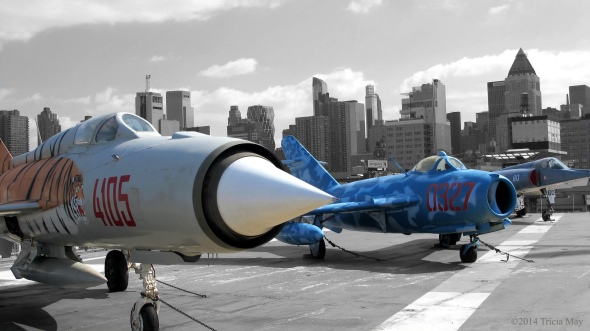 We spent a little bit more to have access to the Space Shuttle Enterprise…but who wouldn’t?  It’s a freaking space shuttle!  It makes no difference to me that it never made it into space – it’s a space shuttle!  My friends husband pretty much felt the same way.  We both just kind of stood there looking at in wonder when we first saw it.

We would have liked to have toured the Concorde that was outside, but it was closed.  I find it sad that the main purpose for this majestic piece of machinery is to now provide shade for picnic tables.

Anyway, we left the ship to head further down the pier in order to catch a water taxi to Brooklyn…we wanted to walk across the bridge.  It was a pretty breezy day, but the walk was nice.

Brooklyn Bridge across the Hudson

Our plan had been to cross the bridge and walk down to the water taxi stop by Wall Street, but those plans were thwarted by a huge demonstration – we couldn’t get anywhere near it.  Turns out 50,000 ultra-Orthodox Jews took to the streets, taking over ten blocks of Manhattan, to protest the Israeli army plan to draft their orders young members into the military.  To get where we wanted to go, we had to basically walk to the other side of the island to Battery Park and catch a water taxi from there.  We had time to look around while we waited, and we came across the Merchant Marine Memorial.

When the water taxi arrived I was half frozen – the wind was very cold and strong, so I happily climbed inside.  Going back to Manhattan this way you get a fantastic view of the skyline.

As we approached the Statue of Liberty, the captain very kindly slowed down…almost stopped, to allow everyone to get all the photos we wanted. 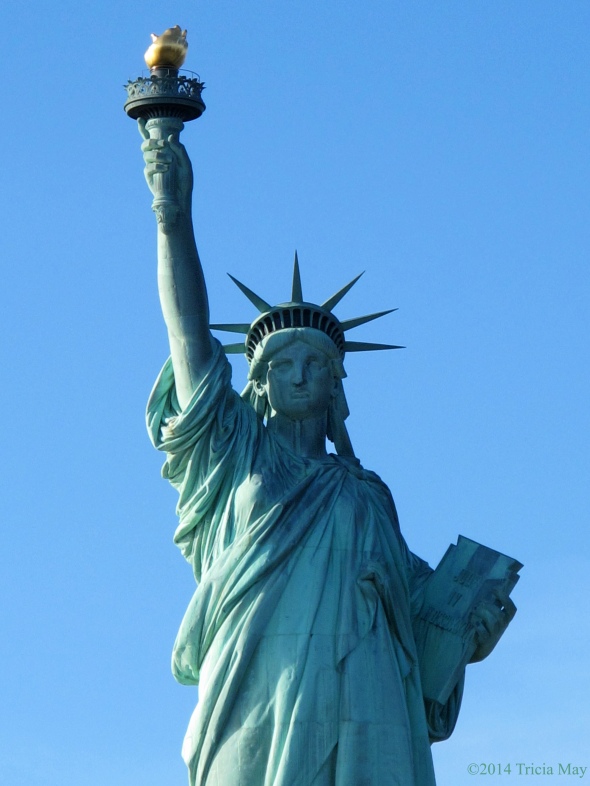 We got off after that, and we looked up and judged by the sky that we could make it to the Empire State Building for sunset, so off we went.  We got up in plenty of time, and man, was it worth it. 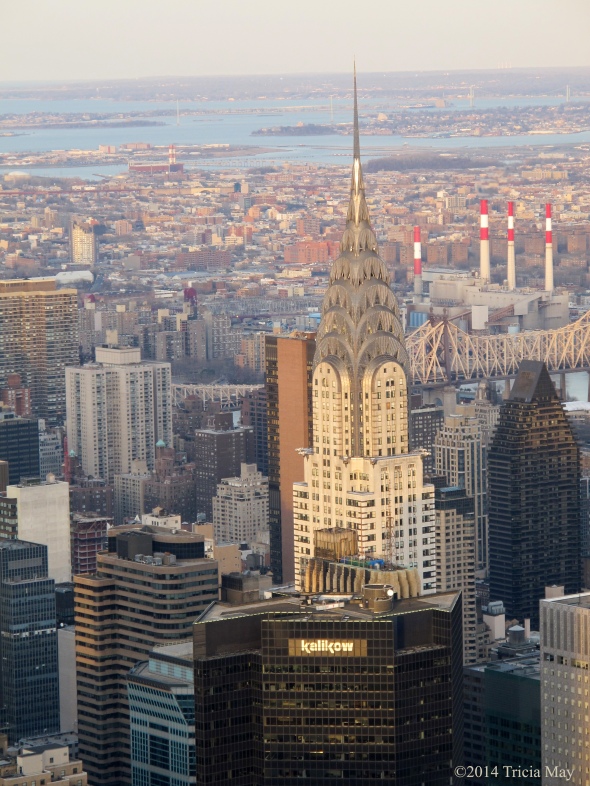 The next day – my last in New York, was to be spent at the Museum of Natural History before going to hear my friend perform at the Lincoln Center.

Who doesn’t like starting their day with dinosaurs?  This guy greets you at the door.

There was also a living butterfly exhibit there that day, so of course I had to go.  Hundreds of butterflies flying around you, some landing on you….very cool.

As cool as the butterflies were, it was time to go to the space exhibit and the Neil deGrasse Planetarium to watch “The Dark Universe”.  Very cool 25 minute film where you zoom through the cosmos, enveloped by stars that go whizzing past.  Almost dizzying at times, but the effects are fantastic. 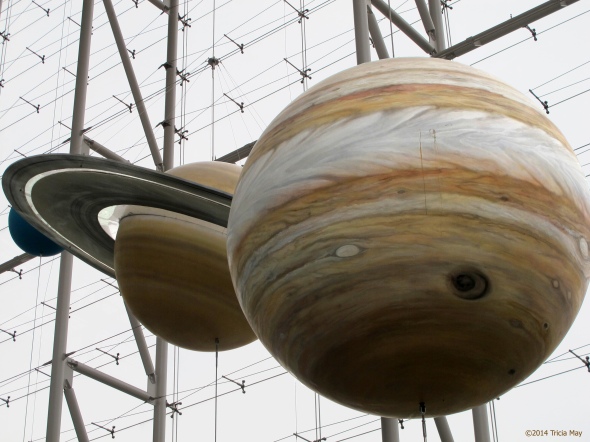 And the store had some pretty cute stuff too. 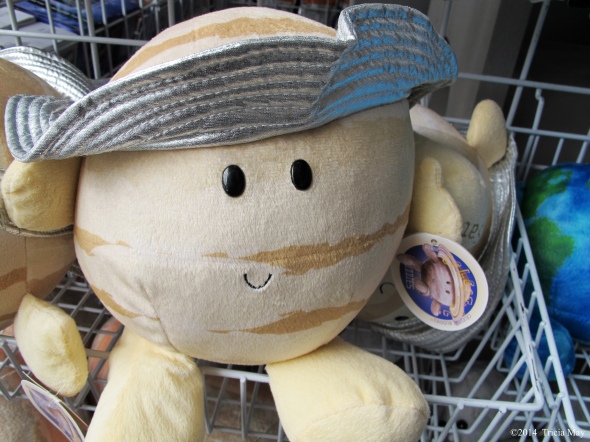 A tour through the dinos and we were done

I had just enough time to get back to the hostel, rest, get dressed, and walk to the Lincoln Centre.  The concert was fantastic and I was so proud of my friend.  What a fantastic opportunity for her, and a great excuse for me to come to New York.